Announcing Not Zero by Ross Clark 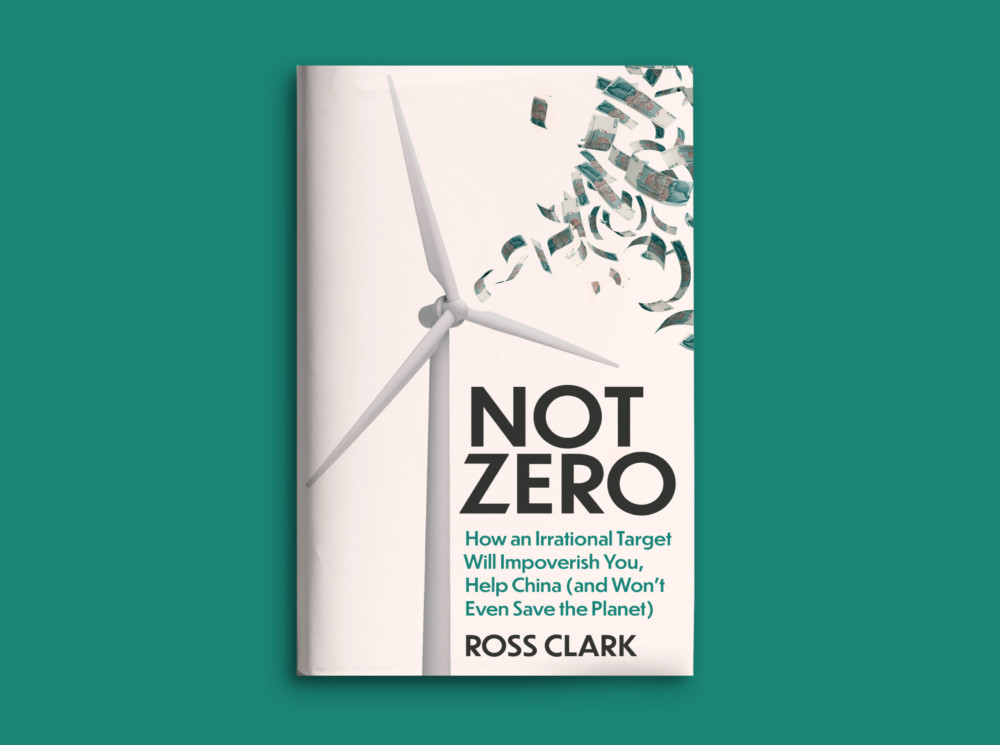 I am delighted to announce another acquisition by Forum Press: Not Zero: How an Irrational Target Will Impoverish You, Help China (and Won’t Even Save the Planet) by Ross Clark.

I will concede that when a book against Net Zero – the legally binding government target to reduce the UK’s greenhouse gas emissions to Net Zero by 2050 – was proposed to me, I was a little wary. There comes a point when one wonders whether one has the energy to court controversy on yet another subject, particularly one that has increasingly become a taboo area. Whereas on some subjects the inanity of the nonsense spouted forth by enforcers of the progressive consensus is so blatant that it deserves to be mercilessly attacked, climate change is different. It clearly is happening and seems likely to have serious consequences. Net Zero seemed (on the basis of essentially zero knowledge of what it entails on my part) like an earnest attempt to tackle it. My initial gut reaction was: Let’s leave this one shall we?

Then I actually read Ross’s manuscript. I almost felt annoyed when I realised that he clearly had many telling points and that he pretty much demolished the case for Net Zero on a basis that it’s difficult to unpick even if you think that climate change is very serious and urgent indeed. It was, put simply, very good and really quite important.

I think that, in most people’s minds, it was as simple as: climate change is bad, something needs to be done about it, Net Zero is something, let’s do that. My thoughts on it had amounted to little more than that, to be honest.

But reading the book raised a whole range of issues I hadn’t considered. Is it sensible to commit to a policy that can only be achieved on the basis of technology that does not exist at the moment and might never exist at the scale required, or even at all? Is that prudent? Is it necessarily a good idea to be rushing massive, expensive, incredibly important policy decisions that might have enormous consequences, a rush that is inevitable if you impose such an ambitious deadline on yourself? Might we end up backing the wrong horses technologically in our rush and perversely end up making the task of reducing carbon emissions more difficult?

The thing that made the biggest impression on me is that in the rush to achieve Net Zero, it’s almost inevitable that enormous costs are going to be placed on those least able to bear it. If you give over a lot more land to tree planting and rewilding rather than agricultural production, food prices are going to go up. Relying exclusively on renewables, given the cost of storage and the intermittency problem, will push up energy costs even further. Running an electric car is going to be a lot more expensive than a petrol car. Heat pumps will be more expensive than gas boilers. The list goes on. It dawned on me that there is a real a risk that the push to achieve Net Zero creates a two-tier society where the wealthy can still afford to fly, drive and not shiver, but the poor increasingly cannot.

Having considered these points, and many others that Ross makes in his book, I started to think more broadly about the state of the ‘debate’ on climate change, and that was the most alarming thing in some ways. I noticed that it has become increasingly difficult in ‘polite’ circles to even mildly question a certain narrative: namely, that there is an immediate catastrophic climate crisis that necessitates the adoption of draconian policies to prevent the earth being consumed in a fiery furnace in the very near future, and that these policies must be driven through at all costs, and democracy – and any other consideration – be damned.

Quite apart from anything else, such a situation is massively counter-productive. The best policies are never produced in an atmosphere of groupthink, hugely constrained debate and quasi-censorship. If political, social and economic realities are not factored into their design, policies designed to tackle climate change will simply fail to be adopted and won’t save us anyway. You can’t wish away politics or public opinion or simple reality, no matter how pressing you think tackling the problem is. In any case, if Net Zero is the right policy, why not welcome reasoned criticism? It could help strengthen the policy even further, and/or give you a chance to rebut the criticism and make the case for Net Zero unassailable.

Now, I can see why one might argue that this would not be the case if the book is simply unreasoning polemic designed to fortify people in their prejudices for some shadowy political reasons. That is why we assiduously fact-checked and stress-tested the book. I don’t think that anyone who reads it in good faith, even if ultimately they disagree with it, could conclude that it isn’t a reasonable, rigorous critique based upon the genuine fear that Net Zero could end up being a disastrous policy for a whole number of reasons. I’m don’t agree with Ross on every point myself, but I have no doubt that he’s arguing in good faith and that his argument is one eminently worth hearing.

And that’s the point of Forum: to publish the books that rationally challenge groupthink, to ensure that important contributors to the key debates of our time who have unfashionable views aren’t closed down. I think that we will undoubtedly be doing that by publishing Ross’s excellent book.

Not Zero: How an Irrational Target Will Impoverish You, Help China (and Won’t Even Save the Planet) is due to publish in Spring 2023. The views of this blogpost are not necessarily the views of Ross Clark.