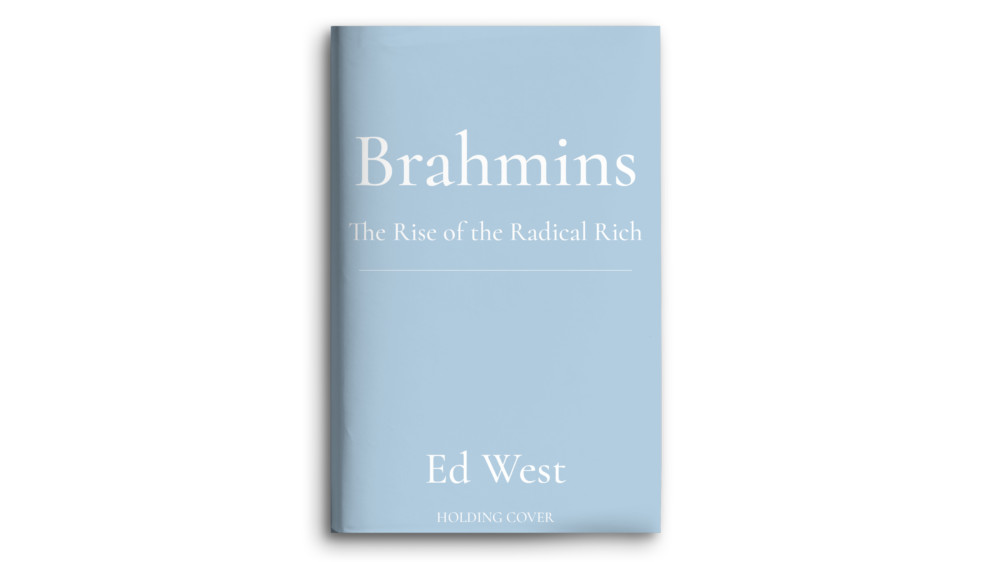 I’ve long since thought that Ed West is one of our most consistently original and interesting writers with an ability to make us see the apparently familiar afresh, and with a wonderful facility for enlightening analogies, illuminating historical comparisons and paradoxical insights. So I am absolutely delighted to announce that Forum has signed his next book, entitled Brahmins: The Rise of the Radical Rich. It will be out next year, and is available to pre-order now.

The book addresses the apparently bizarre paradox that many of the people with the most ostentatiously, some would say outlandishly, progressive opinions in the modern west appear to be among the wealthiest and most successful. Corporations, plutocrats, members of the 1% are eager to thrust their fashionable opinions down our throats: on gender and sexuality, migration, race and a whole range of other topics. It seems a far cry from the sort of strait-laced socially and culturally conservative captains of industry who used to dominate our socio-economic elite 50 or 60 years ago: difficult to imagine a port-soaked top-hatted chairman of the board or a sharp-suited financier from yesteryear arranging seminars on white privilege and pasting the Progress Pride flag to every available flat surface – but today, it is de rigeur.

Ed’s book will touch on a whole range of themes, from the re-emergence of caste politics, the return of a ‘benevolent’ version of progressive imperialism, to the idea of liberalism as class war and the internecine status games that underpin a lot of this. I don’t wish to give too much away – I want you to all pre-order the book and read it in due course! – but I thought I’d add a few thoughts of my own.

The sorts of class dynamics that Ed examines seem familiar to me. I come from an upper-working-class/first generation lower-middle class family. My parents are both, to varying degrees, left-wing, in an old-school sort of a way. They brought me up with a very strict code of ethics – treat black people or gay people, or indeed anyone who is in some way different, in exactly the way you would anyone else, with respect – that in the 90s would have been seen as socially liberal.

But nowadays my parents seem, if anything, mildly socially conservative. Partly this is a certain working-class reticence and prudishness over things like sex (not a bad thing in my view), but mostly it’s because they are largely indifferent to contemporary clashes over so many cultural and identity-based issues. To them, left wing politics is unions and wage disputes and public services and the welfare state: material issues that relate to the direct interests of poor and working class people. Do they care much about Brexit or trans rights or open borders? Put simply, no, not really, unless they can be seen as relevant to such material battles.

These are the views that I inherited and the sort of material leftist politics I still think are important. And when I was at school (a very good grammar school in Essex), they were the sort of views that made me about as popular as smallpox with the other boys, who were almost all considerably wealthier than I was, usually hailing from the nouveau riche Tory-voting Essex middle classes. They thought I was some sort of mad communist.

It was a very good school though, and most of those boys went on to be pretty successful. I don’t keep in touch with very many of them now, but what is striking is how many of those people, who were unthinking Thatcherites aged 14, are now fashionably left-wing, as well as remaining well-off. When I ran into some of these people during the Corbyn era, they’d enlighten me about their conversion to the Left and be surprised when I was rather less enthusiastic.

So the tables have turned, and I’m now the stodgy conservative among my school-aged peer group, although my economic views have changed little. What is interesting, however, is that for these ex-classmates, who have invariably been educated at good universities, their indifference to class and the material wellbeing of the poor seems little different from their attitudes when they were callous teenagers, although they might cover them up rather better now. Their newly discovered leftism is ever-so-radical – right up to the point where it might actually materially affect their comfortable, prosperous lives as bankers or consultants or lawyers or whatever.

It seems to me that for many of them it’s far more about mood music; career advancement; wanting to be seen as a ‘good person’; and status-seeking. They realise that the ‘hang ‘em flog ‘em, bring back national service, privatise air’ views of their youth are now hopelessly low-status, the sort of thing that they’d heard from their Essex parents (often first generation materially wealthy Tory voters from places like Billericay or Brentwood). They have dropped such views because they are as much conformists now as they were 20 years ago, just in the other direction.

And the sorts of left-wing values they now parade are absolutely no threat to their wealth and the economic order they are lucky enough to benefit from. The cultural revolution that is thrusting these values upon us poses no danger whatsoever to the finance and tech and legal firms they now work for and collect 6 figure salaries from. Inequality grows and grows, the poor go to food banks, the wages of the people who make society run (people like my mother) freeze and diminish, and our social fabric rots. But that’s ok, because, as they may have mentioned 12 or 13 times on their LinkedIn, diversity is our strength! You can be whoever you want to be! Our LGBTQIA+ employees bring their ‘whole self’ to work!

The insidious ideological mutations and misplaced priorities of this sort of leftism make me feel faintly nauseous – and us old-school economic leftists are in the weird position where we now find conservatives like Ed West speaking far, far more sense than our supposed elders and betters on ‘the left’.

Ed’s book will do a far more eloquent job of making sense of these weird political times than I can – so I do hope you’ll buy his book, which will be out next year.

Brahmins: The Rise of the Radical Rich is due to publish in Autumn 2023. The views of this blogpost are not necessarily the views of Ed West.