A Dictionary of Naval Slang 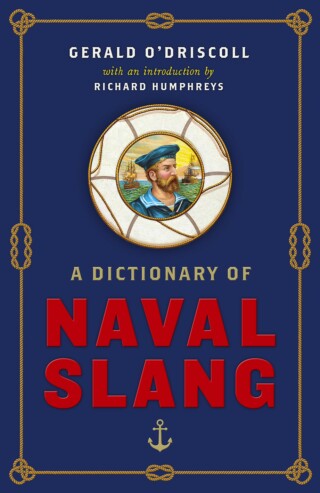 For centuries the sailors of the Royal Navy have been famous for their colourful language. Trapped aboard leaky ships and creaking vessels for months, sometimes years, on end, the crews developed a peculiar language all of their own.

Veteran sailor Gerald O’Driscoll celebrated the Royal Navy’s heydey and preserved its unique language in this hilarious and fascinating collection.

Taking the reader from ‘Acting green’ all the way to ‘Water-rat’, A Dictionary of Naval Slang is a treasury of naval argot, jargon, lingo and cant, and a window on the lost world of living on the high seas.

First published in 1943, this modern gift edition comes with a foreword by author and former Royal Navy submariner Richard Humphreys.

Clampy – Nickname for the owner of very large feet.

Gutzkrieg – A pain in the stomach.

Rum-fiend – As the term implies, a man who is a glutton for rum.

Scaly-back – A veteran; one who has been too long in the navy.

Tin-eye – Nickname given to anyone who sports a monocle.

Wall-flower – Scathing reference to any ship which remains moored to a dockyard wall for a long period.

Gerald O’Driscoll (1886–1947) was an Irish sailor, journalist and humourist who also wrote under the pen-name ‘Geraldus’. A veteran of the Royal Navy, he wrote several best-selling books memorialising the sailor’s world, including The Musings of a Merry Matloe (1927) and Awful Disclosures of a Bluejacket (1929). A Dictionary of Naval Slang, his last book, was published at the height of the Second World War.