Announcing: The Progress Factory: The Modern Left and the False Authority of History, by Ben Cobley 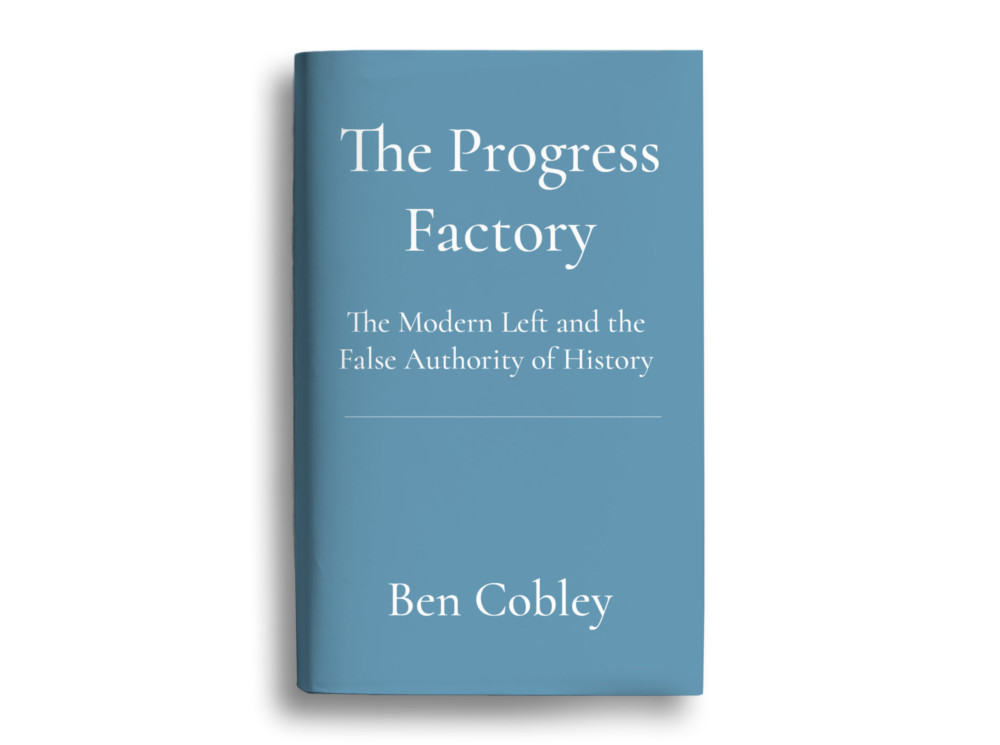 Here at Forum, we’re delighted to begin the process of announcing some of the books we’ve signed in our first few months, as part of our mission to give a voice to dissident, unfashionable, and maverick opinion that swims against the tide of contemporary orthodoxies.

This week, we’re focussing on Ben Cobley’s The Progress Factory: The Modern Left and the False Authority of History, which will publish under the Forum imprint next year. Ben is a journalist and author of The Tribe: The Liberal Left and the System of Diversity.

I’ve been an admirer of Ben’s work for some time, and The Tribe was a razor-sharp critique of the rising dominance of identity politics within our public institutions and on the political left. Despite publishing with a very small press and getting little mainstream publicity, that book touched a nerve and really took off on the basis of social media and word-of-mouth recommendations.

So we’re very excited to have signed Ben’s next book, which will examine the ways that the modern left seeks to use the idea of ‘progress’ to claim for themselves an irresistible source of moral and political authority.

Anyone who uses social media or is otherwise exposed to the mental universe of your standard issue progressive left-winger in the modern era will notice how often they like to claim that their viewpoint is unassailable because they are ‘on the right side of history’, or words to that effect. Old Christian ideas of Providence (which were, in fact, nuanced and complex) have been unconsciously absorbed, altered and simplified in order to imbue radical nostrums with an air of unquestionable, quasi-mystical authority. Ben’s book will examine how this process works, and how it operates in a wide range of areas of our political and cultural life, ranging from our economic and working life the arts and international relations – notably on Brexit.

There are many things that promise to be fascinating about this book, and I don’t want to spoil the surprise, but I will give one personal reflection on this theme. The vision of left-wing politics I grew up with was predicated on the idea that socialist and other leftist ideas had to be fought for in an inherently political and contingent way. The interests of working people would not magically win out: you had to organise, argue and fight for your ideas and policies within the democratic arena, persuade people that what you had to say was in their interests and in accordance with their values. The idea of inevitability, that certain ways of organising society were inevitable or unchallengeable, not even the proper subject for lively debate, was, historically, most often the complacent assumption of conservative defenders of the status quo.

Ben’s argument illustrates, to me, how the roles have now almost totally reversed. Yes, there were always Marxists who believed that ‘history is on our side, and we will bury you’, who thought that there was some inherent, unstoppable logic that invested certain forms of social and economic organisation with the authority of inevitability. But the left in democratic countries – particularly in Britain – where rights such as the right to vote, the right to protest, the right to be treated as an equal citizen, were hard won – usually knew only too well that politics is contingent, and even ideas that they passionately believed in needed the authority that came from argument and good-faith persuasion. They also knew that the price of democracy was the possibility of failure, of losing elections – and of accepting the verdict of the people when it didn’t go your way – and that that was a price worth paying for a free, democratic society, however attenuated or limited that freedom and democracy might sometimes appear.

Nowadays however, as Ben will examine, a form of the Marxist assumption in the inevitability and authority of history and progress has infected most of the left, even the more moderate parts of it. Their characteristic ideas (which are less about materialist and economic issues than was the case with the old Marxists) are considered self-evidently correct (no matter how un-self-evident they demonstrably are to the millions who vote against them), part of an unquestionable teleological unfurling of the inner process of liberal-secular-humanist-left righteousness. Since the masses seem inexplicably resistant to accepting these ideas, the modern leftist vanguardists have increasingly come to believe that they must ruthlessly promote and enforce their ideas through pretty much any means other than the vulgar business of actually trying to persuade people honestly and win elections. Desirable (in their view, anyway) political objectives are legalistically presented as ‘human rights’, and therefore standing above the political fray, even when the rights in question are clearly highly contentious and far from obvious to everyone. Progressives gain control of any institution that doesn’t involve having to be popular or democratically accountable – quangos, charities, corporations etc – and then seek to present themselves as ungainsayable experts who can or should not be questioned when they seek to impose progressive dogma on the majority without debate. This explains their rather extraordinary valorisation of expertise and technocratic knowledge. The management-class Left now sees the politics of promoting and upholding the rights, interests and instincts of the common man and woman, which used to be the basis of much left wing politics, as simple ignorance and bigotry: ‘vulgar populism’.

Ben is still, I believe, a social democrat (as are many modern people of a similar mindset, such as David Goodhart) – he is no reactionary or right-winger – but he recoils from this authoritarian, undemocratic, elitist style of moralising progressive politics. Rather than smear him as a racist or an evil right-winger, progressives should, when the book publishes, listen to him and try to absorb his wise words and calm analysis.

I’m not holding my breath on that front. But you never know.

The Progress Factory: The Modern Left and the False Authority of History is due to publish in Autumn 2023. The views of this blogpost are not necessarily the views of Ben Cobley.