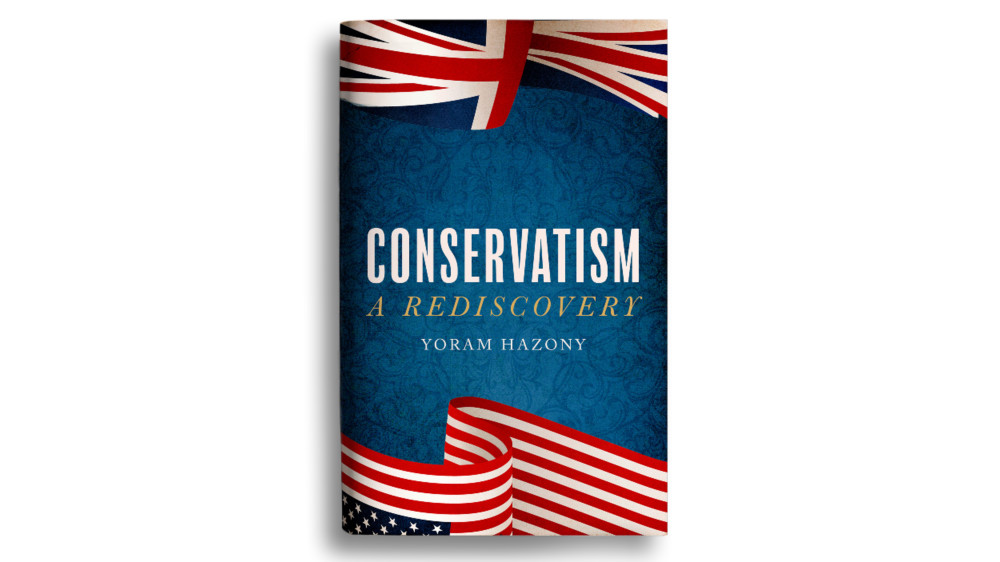 I’m very pleased to announce that Forum will be publishing the UK edition of Yoram Hazony’s new book Conservatism: A Rediscovery. It will publish in late August in time for Yoram to make a trip to the UK in mid-September to promote it.

Since the book delineates a distinctive form of Anglo-American conservatism that, Yoram argues, originated in England, it seems particularly appropriate that the book should get special attention in the UK. In the book, he delves into the thought of unjustly overlooked English figures such as John Fortescue, Richard Hooker and John Selden, discovering in their ideas a form of conservatism based on tradition, empiricism, and the nation (among other things) with roots going back to the 15th century. I enjoyed the book immensely and hope that it will find the British audience it surely deserves.

The book is an urgent call for conservatives to wake up to the fact that their political tradition is distinctive from merely a form of right-leaning market-obsessed liberalism that many (in the UK as much as if not more than in the US) assume is synonymous with conservatism. Yoram argues that the key issue is that the form of Enlightenment liberalism that has become dominant on both mainstream centre-right and centre-left is blind to the enduring importance and reality of the larger units that we are bound to by ties of mutual loyalty – most significantly, families, tribes and nations. Enlightenment liberals see and value only individuals, and usually atomised individuals isolated from the traditions, contexts and histories that they have inherited from their parents, institutions and culture. Not only this, but for such people the key political figure is an individual who is assumed to behave in accordance with abstract rationalist theories based upon concepts like autonomy, universalism and consent, rather than in line with what all experience teaches us.

A detail I particularly like from the book is Yoram’s observation that Enlightenment liberalism was ‘made in the image of unmarried, childless individuals’ who know little of family life and of what it means to conserve and pass on one’s habits, traditions and mores to one’s children. The more you look into this, the more you realise how literally true this is. As Yoram points out, ‘Hobbes, Locke, Spinoza, and Kant never had children. Descartes’s only daughter, born outside of marriage, died at the age of five. Rousseau had five children with a mistress but abandoned them all to an orphanage in infancy’.

To this list, we could add Voltaire, Adam Smith, Jeremy Bentham… Tom Paine was married twice, but his first wife died in childbirth less than a year after they got married, and he separated from his second wife 3 years after they were married: he was childless. John Stuart Mill did marry Harriet Taylor, but they had no children together. There are a few exceptions, but once you start to look into it, it does become striking how few of the foundational, canonical liberal political thinkers had anything approaching a conventional married family life.

Of course, some people are unable to have children, and it is unfair to blame them for that. Clearly the fate of Tom Paine’s wife, for example, was a great sadness to him. However, given that the vast majority of adults, particularly in period spanning from around the 17th to the 19th centuries, marry and have children – and it’s rather essential to the continuity of human life on earth that they do – it does seem to imply an important blind spot. Not knowing the compromises, duties and sacrifices of marriage and parenthood is inevitably going to give one a certain outlook on life that tends to elevate certain values over others.

Married people can no longer consult only their own wishes: they must modify and restrain their own plans and desires to take into account the preferences and needs of their spouse. Parents tend to be acutely aware that human beings are intensely dependent on each other, as they have experienced the most extreme form of this: being responsible for a baby who utterly depends on his or her mother and father (and perhaps an extended family too) for everything, 24 hours a day. They simply have to accept the price of parenthood: giving up an awful lot of spontaneity, freedom and autonomy, because they have duties that outweigh their own preferences and whims (points made also recently by Mary Harrington). The question of ‘consent’ becomes rather meaningless. Yes, in some sense, unless the baby was unplanned, you have consented to parenthood. But in practice, in the rough and tumble of caring for children, have you ‘consented’ to change that nappy? Or spend 3 hours trying to get an overexcited infant to sleep when you are exhausted yourself? Did I consent to have a small person steal my spectacles and hurl them to the floor 14 times a day? They’re meaningless questions. The concepts one needs to make sense of these things are ones like ‘duty’ and ‘sacrifice’, not consent.

One also starts to realise what it means to live a life that is not simply ‘in the moment’, dominated by fleeting pleasure and spontaneity. One starts to think in terms of decades and generations instead of minutes and days. One feels an intense interest in ensuring that one’s children grow up to have the right values, to have a sense of being at home in the world, in possession of the frameworks of acting and thinking that one values oneself. It is useless to deny this. Everyone knows that their children will have their own agency and take their own decisions when they grow up, but everyone wants their own children to reflect their worldview and values, to be recognisable to them, to grow up as part of their tradition. No one wants their own children to be utter strangers to what they think of as important in life. Militant atheist humanists take this attitude just as much as Roman Catholics, Lutherans, Anglicans, Jews or Muslims do.

If you have a political tradition that has been overwhelmingly dominated by people who have known none of this, then it’s not really surprising that it struggles to accommodate such experiences and emphases. The idea that the main – indeed, only – political unit should be free, consenting individuals who are the supreme masters of their own fate, who make and remake their own life according to their whims with no regards to tradition or inheritance, might make sense if you’re a middle-aged childless bachelor. It might even contain some grains of truth. The vast majority of the human race, might, however, be excused for finding it a rather one-sided and unrealistic way of understanding human life, society and politics.

Yoram’s book is an attempt to chart an alternative, one which is erudite, interesting and provoking. It’s well worth a read when it publishes in a few months – and you can pre-order now.

Conservatism: A Rediscovery is due to publish in Autumn 2022. The views of this blogpost are not necessarily the views of Yoram Hazony.