In January 2023 Swift press will publish The Shards by Bret Easton Ellis, his first novel in thirteen years.

Bret will be visiting the UK in February 2023 and will speak at a major public event on  Thursday 2 February in central London (details to be announced) and on Friday 3 February at the Sheldonian in Oxford. Get your tickets to see Bret Easton Ellis in Oxford. 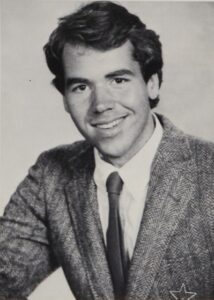 Ellis is the author of six novels, including Less Than Zero and American Psycho (both published by Pan Macmillan), a collection of essays and short of stories. His work has been translated into 32 languages, and he has sold 705,120 UK copies for £5.3m in the Nielsen BookScan era, which began in 1998.

Publisher Mark Richards said: ‘The Shards is everything you could hope for from a Bret Easton Ellis novel; in it, he takes the setting of Less Than Zero, the metafictional set-up of Lunar Park and the animating horror of American Psycho, and reworks them into something new and brilliant – a novel that is a coming-of-age masterpiece, channelling teenage desire and sexuality into a book that also reflects the changes that the culture has undergone in the past 40 years. It’s been a long time since his last novel, but The Shards is more than worth the wait. We at Swift are thrilled to be publishing it, and we look forward to it reaching his legions of existing fans, as well as many new ones.’

If anyone’s told you lately that the novel is dead, they haven’t been taking the pulse of LGBTQ fiction, which is not only alive but keeping some of the most isolated members of the community alive by offering them a connection. It brings them the news.

The cost of isolation is painfully visible in Patrick Gale’s novel Mother’s Boy, about the poet Charles Causley, who was born in 1917 and lived most of his life in Launceston, Cornwall. It isn’t helpful to talk about whether Causeley was or wasn’t gay, Gale has said. The category wasn’t available to him. As Gale presents him, he sees himself an outsider, fully at home nowhere – a man without community.

When my partner first came out, in those isolating years before Stonewall, the novels she found were pulp fiction, with seedy covers, seedy titles, and for the most part seedy writing. Ask Lord Google about them and he’ll lead you to the likes of Women in the Shadows, Women’s Barracks, Strange Sisters… Oh, hell, I could go on, and it’s hard not to make fun of them, but the news they carried was hard to find back then and it mattered. Not many other channels carried it, and I owe them some respect, even if it’s not unmixed.

I came out after Stonewall and the first lesbian novel I read was Isabel Miller’s Patience and Sarah. Even though by then an entire lesbian community was within easy reach, it still brought me the news that I wasn’t alone. It’s true that I already knew that, but it was news all the same. It spoke directly to my (overcharged and still isolated) emotions. It’s the only book I ever remember hugging.

‘Just that people are still writing it,’ her friend answers.

They still are – we still are – and these days readers can find a range that stretches from literary novels to genre fiction, from stories that keep a tight focus on relationships to those that take a wide-angle look at how we live in the world. It’s that wide-angle look that draws me most strongly.

Emma Donoghue’s riveting The Pull of the Stars, for example, turns to same-sex attraction only in the final pages, and with the lightest touch, closing a circle that by then is crying out to be closed. But her characters engage with the full range of their world – the flu epidemic, the stifling hand of the Church in Ireland, the demands of nursing at a time when medicine had so little to offer.

Naomi Alderman’s Disobedience takes us into the ultra-Orthodox Jewish community, where people who are attracted to the wrong sex hide the knowledge from themselves as best they can and where the question How are we to live? is answered by rule and law and tradition, not by individual desire and choice.

In both books, attraction is powerful but it doesn’t drive the story. The characters; lives are made up of multiple layers, and their stories speak to the LGBTQ community but also to the rest of the world. These are our stories, and we need them, but they are also your stories, whoever you are. We are all human.

Ellen Hawley is the author of Other People Manage out now.

Jessie Greengrass‘s unforgettable novel The High House has made the Orwell Prize for Political Fiction 2022 shortlist.

Each year, the Orwell Prize independent panels award prizes to the writing and reporting which best meets the spirit of George Orwell’s own ambition ‘to make political writing into an art’.

Jessie Greengrass has received widespread acclaim for her novel The High House and we are thrilled to see it celebrated on The Royal Society of Literature’s Encore Award 2022 shortlist.

The judges commented on The High House: ‘Set in a flooded England in the near-future, this is a novel that confronts our collective failure to act in the face of the greatest existential crisis humanity has ever seen: the climate crisis. But with such bleak subject matter, Greengrass shows how moments of joy and love can still be found despite such terror, in this understatedly powerful novel.’

Jessie claimed: ‘I am absolutely delighted to be on the shortlist for this year’s Encore Award. Writing a second novel has felt like a very different, and in many ways a much harder task than writing the first, and comes with a much greater awareness of all the very many things it’s possible to get wrong, so to have this recognition is a joy – and a great spur as well to keep on working on a third!’

We were thrilled to win the Nick Robinson Newcomer of the Year Award at the 2022 Independent Publishers Guild Awards and are looking forward to commemorating our second birthday in June with our first accolade in hand.

Congratulations to our fellow shortlisted publishers Confer & Karnac and Renard Press and to all the winners on the night.

We are so pleased to have Jessie Greengrass‘s novel The High House on the Edward Stanford Travel Writing Awards 2022 shortlist in the Fiction, with a sense of place category.

Congratulations to all the authors and publishers celebrated. View the full shortlist.

The award winners will be announced on Thursday 3rd March 2022.

You can buy the book at Waterstones, Foyles, Bookshop.org or your local bookshop. The High House is available in paperback this March.

We were thrilled to reach the end of 2021 with a stellar group of eight books selected as Books of the Year.

The ‘deeply moving’ The High House by Jessie Greengrass was chosen by Good Housekeeping. Joanne Finney described her reading experience as an extremely memorable one: ‘so grounded in reality and the ordinariness of the lives of this disparate group, that I had to read parts of it through my fingers’. The High House was also shortlisted for the Costa 2021 Book Awards.

Calleja called Seesaw ‘a brilliantly meta satire about literary culture, race, class, not writing – the spoofing of academic language and the unreliable narrator’s escapades are creasing me up and making me cringe in equal measure’.

The Upswing by Robert Putnam and Shaylyn Romney Garrett, was reviewed as ‘the most important book in social science for many years’ by Paul Collier in The Times Literary Supplement Books of the Year roundup.

To the Lake by Yana Vagner was praised as ‘a galloping thriller that you will want to devour in one sitting’ by Susan Swarbrick in The Herald and Adam LeBor in Financial Times chose ‘Vagner’s standout debut’ as ‘an absorbing, evocative odyssey that also reaches deep into the main characters’ backstories’.

Woke, Inc. by Vivek Ramaswamy was selected by The Sunday Times, The Daughters of Kobani by Gayle Tzemach Lemmon features in the personal favourites of The Daily Express, and Bring Back Our Girls by Joe Parkinson and Drew Hinshaw was included in The Telegraph‘s highlights.

We are thrilled to have Jessie Greengrass‘s inimitable novel The High House on the 2021 Costa Novel Award shortlist.

Congratulations to all the authors and publishers celebrated. View the full shortlist.

Judge Jessie Burton says, ‘what we wanted was a novel that a reader would want to read and immerse themselves in, even if it was challenging material, like facing the reality of the world heating up. And I think Jessie’s book makes it all uneasily plausible, because she does it very subtly. She’s a brilliant writer, and that’s what elevated it out of just writerly concern for the planet’.

Read the full Guardian article about how this year’s shortlist highlights climate anxiety.

Read an interview with Jessie about facing her fears in The High House.

You can buy the book at Waterstones, Foyles, Bookshop.org or your local bookshop.

Jessie Greengrass‘s poignant and urgent novel The High House quickly became a fan favourite and is an essential bookshelf staple as we watch our leaders publicly declare how they are going to tackle the imminent issues of climate change at The 2021 United Nations Climate Change Conference.

Chosen by the Independent, Guardian and New Statesman as a most anticipated new novel of 2021, The High House moved readers to hold up their five-star praises many times over.

In Jessie’s words, ‘for all that wilderness and its preservation has a vital part to play in the future, we also need to learn to see the value in the rest of the planet, even the parts which might seem catastrophically at odds with traditional ideas of the wild’. Head to bookshop.org to read Jessie’s list of recommended environmental reads and a short essay on her selection of books.

Praise for The High House:

‘This brave, important and exquisitely written novel is a frightening one. But even the darkest times are lit by moments of beauty and grace, and the reader is uplifted by Greengrass’s conviction that salvation lies not in competing with one another to survive but in uniting to help those we love’ – Sigrid Nunez

‘A book suffused with the joy and fulfilment of raising a child. The High House stands out, for Greengrass understands that perhaps the best writers and artists can hope for no is to help us admit, accept and process our collective failure to act’ – Guardian

‘By the end I felt a tightening in my chest. Not only admiration for what I had read, but fear, which I had swallowed down, one calm and often beautiful sentence after another. The High House managed to shock my system in a way that the attention-grabbing antics of Extinction Rebellion have not done’ – Scotsman

‘Will delight readers who relish the ambition and originality of her work, and leave them pondering its ideas about climate change, family, inequality and the ethical dilemmas that are posed by a crisis’ – i paper

‘Greengrass uses a future post-apocalyptic world as a perspective from which to apply the melancholic, nostalgic air of Ian Sinclair, Rachel Lichtenstein or W G Sebald to our own present. You think you have time. And then, all at once, you don’t’ – Irish Times

‘Profoundly moving, this is an incisive yet hopeful reflection on how to move forward together’ – Julianne Pachico

‘Subtle and affecting, tender and terrifying, and written in the most sumptuous and delicate prose’ – Esther Freud